Community of Practice SANDI Training Center: 8. How to Handle Objections

We live in an unprecedented age of options and that can make choosing difficult.

The choice is the purest expression of free will -- the freedom to choose allows us to shape our lives exactly how we wish (provided we have the resources to do so). The choice is difficult because it also represents sacrifice. Choosing something inherently means giving up something else -- something we might want tomorrow, or next week -- and that won’t be available to us if we don’t grab it today.

So, here's an easy-to-understand guide to choice. It will help you understand the roles of bias, priming, and other psychological quirks in decision-making.

Not only will you be able to make better decisions yourself, but you'll also gain valuable tips that will make your audience more likely to see and choose a SANDI program.

On the surface, decisions seem easy. You weigh your options, measure them against your preferences and goals, and choose the option that’ll bring you the most benefits.

Of course, nothing’s that simple. Everyone values different things, has different decision-making frameworks, and has different preconceptions and worldviews that shape the ways they evaluate a situation. But all of us fall prey to similar decision-making quirks. You can never enter a situation knowing exactly what your prospect is thinking, but taking advantage of the six patterns below can help when promoting the Project SANDI program.

A study by neuroscientist Antonio Damasio found that decisions become almost impossible when they’re only reduced to logic. Damasio studied subjects who had brain damage in areas that generate their emotions and found that they couldn’t make even simple decisions, despite being able to logically talk through the pros and cons of different options.

When speaking to prospects’ don’t just give them the facts. Go above and beyond and paint them a picture of the new life they’ll live if they choose your product -- one where a certain aspect of their job is easier, where they’re receiving recognition for moving a metric, or they’re able to crush the goals they’ve struggled with for a long time. Combine facts with appeals to their hope that things will get better, their fear that they won’t, and their excitement about finding a solution to bring a sale home.

2. The more choice we have, the worse off we are.

In her TED talk “How to make choosing easier,” Columbia Business School professor Sheena Iyengar describes an experiment she conducted with different varieties of jam. She set up a booth in a grocery store that displayed six or 24 types of jam. Under the six-variety condition, people stopped less frequently than during the 24-variety condition. However, six times as many people bought jam when fewer varieties were displayed.

The takeaway? While you may be excited about all the different features or products your company offers, overloading your prospect with a list of what they can buy will be overwhelming. Ask a few questions about what your prospect is looking for first, then walk them through a pared-down list of options that’ll make it easier for them to digest and buy.

3. It’s harder to make choices at the end of the day.

This pattern is due to a phenomenon called “decision fatigue.” As the day wears on, it became harder for the parole board to consider every aspect of a case thoroughly, so they defaulted to what seemed like the safest choice -- keeping prisoners in jail, or the status quo.

Your prospects are subject to decision fatigue, too. If you’re dealing with a particularly difficult deal or hesitant prospect, try to schedule calls earlier in the day, when your prospect’s resistance to change isn’t artificially high.

4. We can make complex choices if we’re eased into it.

While Iyengar did find that giving people too many options was overwhelming, we are capable of making extremely complex decisions -- if our options are presented to us correctly. Iyengar used the example of customizing a car to illustrate her point: If choices with fewer options are shown first (for example, one of four types of engines), people are more likely to stick with the entire selection process than if options with a wide variety of choices (between 56 car colors, say) are presented first.

Follow the same pattern when you’re working with a prospect. Start with having them make simple choices before you get into heavy customizations.

The takeaway? Keep things simple. There may be 17 good reasons for your prospect to buy from you but highlight the most important three or four to start. Don’t overwhelm them with a laundry list of benefits, lest they end the sales process just to relieve their brains.

A 2014 study by Princeton University researchers found that the smaller a decision-making group is, the more likely the group is to make the right choice. That’s because group decisions are made based on two types of information: Correlated (things accepted by or known to all members) and uncorrelated (facts perceived only by some group members). They’re equally important, but the larger the group, the more likely it is that correlated information will outweigh uncorrelated information.

While it’s important to have all stakeholders who actually have decision-making power in the room when you’re making a sale, try and limit that number. The most accurate groups in the study fell between five and 20 members. Reps selling to smaller businesses probably won’t run into this problem, but it’s certainly a possibility that selling to large corporations could involve dozens of stakeholders. 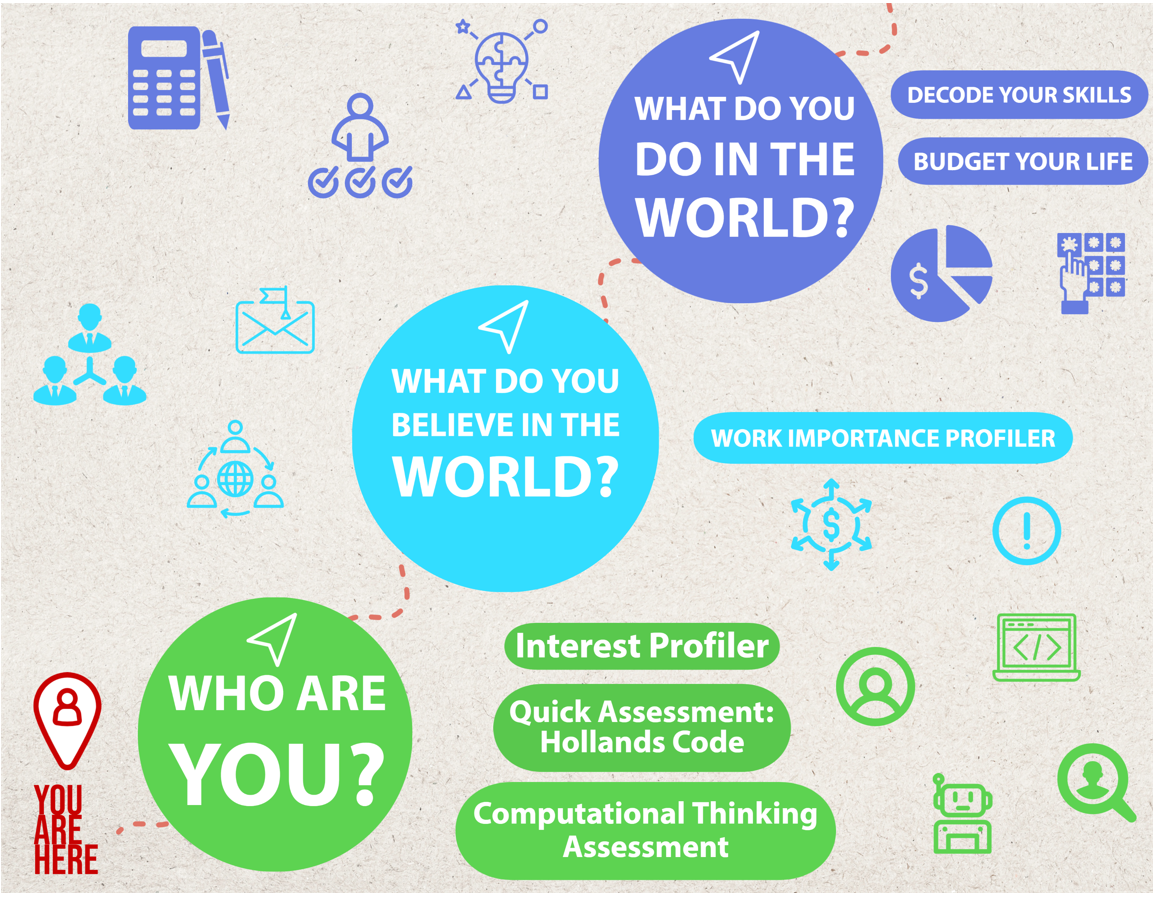 Mapping the 3 Big Dots through the Nevada Career Explorer

Talk to the Client: Find out what drives or motivates them

Give them an assignment asking them about their "gravity" problems: There are things they cant change.

The hook has been set for step #3

What is it like if I tried this? Going into the 5 simulations that can show how the assumptions are exposed.

Push the individual to ask themselves

Through this three-map prototype when people hear a story that rings with them, they exy experience narrative resonance and can identify a potential way of moving forward. Go into the VR to see if these occupations resonate.

Gathering and guiding participants to see options and vision of new careers is a very big part the community of practice brings to the table. Helping people narrow down. Indecisive individuals will have too many choices and experience "choice overload". Psychologists explain we can't handle more than 5 choices. Research has been done over and over that people don't decide how they feel about a decision till the decision is made. This is the value of having an Individual Career Map (ICM) manifest. Someone can make a decision at any leg of your journey and go back and reconsider taking a different direction.

How to Handle objections- Poll Box

Your feedback is valuable, let us know how we can improve this page. Click here.